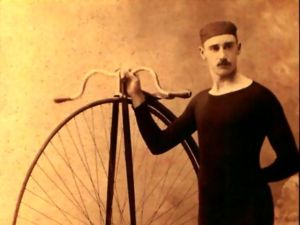 Indian’s Founders: From Bicycle Racers to Motorcycle Makers
George M. Hendee (1866-1943) was the leading American bicycle racer of the 1880’s. Between 1881 and 1886, Hendee won 302 of the 309 races he entered. After his retirement from racing, he became involved in the bicycle manufacturing business–first as a representative for established companies, then manufacturing his own Silver King bicycles in Springfield. Hendee was a man with considerable leadership qualities. His business acumen, promotional skills and vision took the Hendee Manufacturing Company from a small start-up operation to the position of premier motorcycle manufacturer in the world in his 15-year tenure as the Big Chief.

Carl Oscar Hedstrom (1871-1960) was a Swedish immigrant who grew up in Brooklyn, New York. Possessed of exceptional mechanical ability, he trained as a toolmaker while pursuing his interest in bicycle racing. He competed professionally in the 1890’s, racing bicycles of his own design. His tandem motorized pacing bike, which he rode with fellow racer Charles Henshaw, drew the attention of George Hendee, who owned interests in several bicycle tracks. Financed by Hendee, Hedstrom built his first motorcycle in Middletown, Connecticut, at the Worcester Cycle Manufacturing Company and brought it to Springfield. He served as the Chief Engineer and Designer of Indian Motocycles until his retirement in 1913.

Indian Motocycle
George Hendee and Carl Oscar Hedstrom formed a partnership to commercially produce a motor bicycle with a single-cylinder engine. Choosing the name “Indian” as the manifestation of their pioneering vision, the two men developed one of the most famous motorcycle brands in the world. Indian Motocycles were made in Springfield from 1901 to 1953.

At the height of Indian’s production in 1913, George Hendee bought ten acres of land and built a second factory off of Page Boulevard in East Springfield. Dubbed Hendeeville, it was only in operation for three years, then the company’s Board of Directors voted to sell the property in late 1916. When Ralph Rogers took over as Indian’s president in 1945, he was faced with a hopelessly outdated facility at The Wigwam, Indian’s headquarters at State Street. His first corporate decision was to purchase the old Indian factory complex in East Springfield, which was then in the hands of the U. S. government’s War Assets Department. The Wigwam factory was dismantled and sold, and production was transferred to the old Hendeeville site.

The East Springfield facility was on a single floor which made it easy to set up new assembly lines. Using pre-war jigs and tooling salvaged from The Wigwam factory, the first post-war Chiefs rolled off the assembly line in the spring of 1946. With the demand created by the civilian shortages of WWII, over 2,800 were produced and eager Indian enthusiasts snapped them up. Along with the updated Chiefs, the newly designed Arrows, Vertical Scouts and Warriors were built at the refurbished Hendeeville site in the late 1940’s.